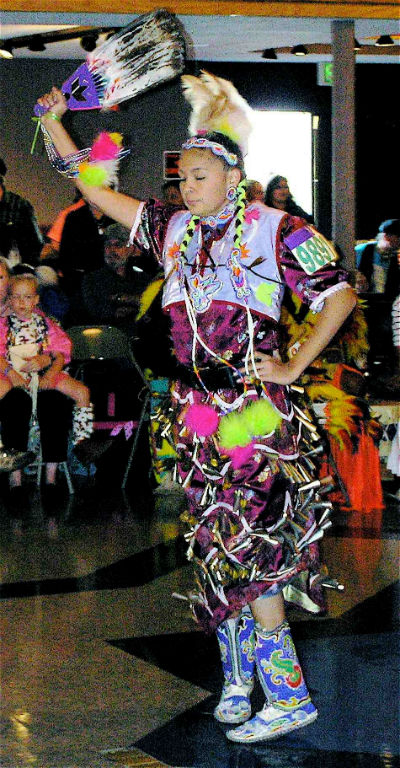 FAIRBANKS, AK–This year can be considered reassurance for the “group from Wisconsin.”

That’s what people called the St. Croix Chippewa dance team at the World Eskimo-Indian Olympics in Fairbanks July 18 through July 21.

The team won first place. Last year, their first time at the contest, they came in first, too.

At that first competition, they were the only dance team from the lower 48 states. Many people in Alaska had never seen a powwow circle. But it wasn’t beginner’s luck. The team proved it was a contender. Last summer, contest officials separated the dance competition into Eskimo and Native American categories.

This year, they lumped those categories together, increasing the number of first place competitors from five to seven or eight, according to Jeff Butler, one of the dance team’s advisors.

Some of the Eskimo teams have 30 to 40 dancers who wear “overwhelming” outfits, Butler said.

Still, the St. Croix team came in on top.

The most popular dances the team performed were social dances, those where audience members can participate. The arena was packed, and people poured in to dance with the St. Croix team.

“Normally, we form a circle,” said youth dancer Katrina Decorah, “but we couldn’t because there were so many dancers.”

“They danced with smiles,” Butler said, “they were happy.”

The group of nine kids originally learned to dance by watching others. They practice and perfect their moves on their own.

In addition to dancing, team members can enter solo contests, such as stick pulling and regalia presentation.

Katrina Decorah won second place for presenting and writing about her jingle dress.

In an essay, she wrote about the dress’s meaning. She also said her beadwork was passed down to her from family members. Her leggings, for example, used to be worn by her mother.

The team received a trophy for its win. Dancer Brandon Geshick said the trophy will forever remind the team of their trip.