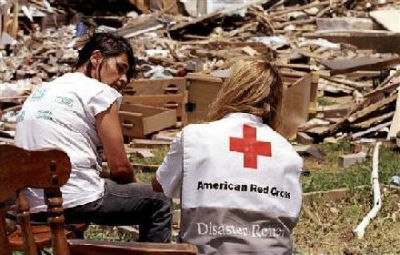 SIREN—Lawanda McMonagle and her husband used to live behind the Pour House.

Now they live in the poor house.

Their rented house, behind the bar which is on State Road 35 in downtown Siren, blew over in the Monday night tornado.

They will seek refuge in the Red Cross shelter, set up in the Siren school, a few blocks away.

Mrs. McMonagle was throwing leftover belongings in the trunk of her car, which had a flat tire, Tuesday morning when she broke down. She said she wanted to get out of town. She didn’t know where she was headed.

Her husband dug for his eyeglasses, medication and false teeth in the rubble of their house.

Mrs. McMonagle could not find her purse. The couple has no renters’ insurance.

“My cat. My poor baby. I’m crying and crying for him, and I can’t find him no place. He’s never been outside. He’s got no claws.”

Although the Red Cross can’t bring back the cat, it can give the McMonagles a place to sleep and food to eat while they figure out what they’ll do next.

The couple, who had stayed at their landlords’ Monday night, planned to walk the few blocks to the shelter Tuesday afternoon. They needed food and eye glasses and false teeth for Mr. McMonagle, who lost those items in the storm.

The Red Cross, inside the school on Fourth Avenue, cared for around 75 people Monday night and early Tuesday morning.

The shelter was opened initially by volunteers including Linda Anderson. She couldn’t sleep in her Grantsburg home knowing people in Siren were homeless.

“The closer I got to Siren the worse it was,” said Anderson, who headed over to Siren at around 10 p.m. on Monday night.

Anderson, who works at the government center and has taken disaster aid classes, began setting up cots and comforting people.

She handed out teddy bears, provided by the sheriff’s department, to shaken kids and elderly women.

By around 2 a.m. Tuesday morning Red Cross workers from the Chippewa Valley chapter in Eau Claire had arrived.

Since that point, the shelter effort has gone smoothly, Nancy Knoll of the Red Cross said.

Organizations, businesses and people have donated food for workers and tornado victims. County nurses are on site, and stores have offered to haul in whatever the Red Cross might need. Already the St. Croix Chippewa, the Grantsburg IGA, Stop-a-Sec and Wal-mart have sent items and food.

The local volunteers “are doing a spectacular job,” Knoll said.

People who stay at the shelter can get sleep, eat and receive basic medical attention.

In order for homeless people to receive help now or in the future, they must register at the Red Cross site. Even people in need of temporary housing should report to the Red Cross.

The organization had secured a shed at the Burnett County Highway Department on State Road 70 in western Siren for material goods donations.

The shelter will be at the Siren school indefinitely.

“It will continue to be open as long as the people need it,” Knoll said.

Volunteers, such as Anderson, will continue staffing the shelter. They feel glad to be useful in the disaster.

Anderson had helped a group of mentally handicapped victims settle into the shelter. They were proud that they remembered to go into a bathroom without a window when the storm hit. She praised them.