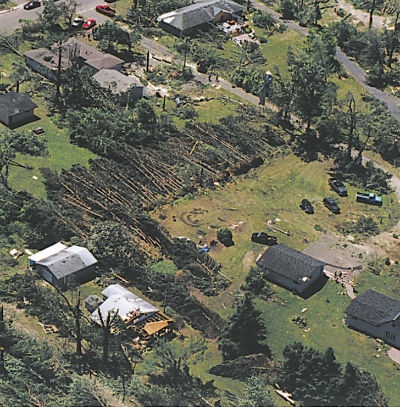 Officials seek disaster aid for place where three died and a mess remains.

“I haven’t seen such a broad swath of hits on state ground,” he said about the tornado, which may have reached speeds of up to 206 mph. The storm hit Siren at approximately 8:30 p.m. Monday night.

The governor saw destruction enough to ask for federal aid: houses and businesses leveled in central Siren, near Hertel and near the Mudhen Lake area in western Burnett County. McCallum toured the disaster area by foot, by car and by helicopter.

Gov. Scott McCallum announced at 2 p.m. Tuesday at the Lodge at Crooked Lake that he will ask the federal government to declare a disaster. If President George Bush consents, the Federal Emergency Management Association (FEMA) can send disaster dollars to Burnett County.

The money would be spent repairing 30 miles of wind damage stretching from Siren’s Doctors Lake to Spooner.

The dollar amount of damage has not yet been determined. The county’s emergency management director, Bobbi Sichta, said she plans today or Thursday to use the county’s tax roll to estimate.

At least half of Siren’s 400 homes were destroyed or severely damaged, said Larry Blahauvietz, Siren’s village president. Most of the others probably had hail damage and trees down, he said.

Three people were killed in or after the storm. Sylvan Stellrecht, 80-year-old Ruth Schultz and 60-year-old Thomas Haseltine all died. They were all from the Hertel area.

At least 14 people were injured and taken to area hospitals. By 10 a.m. Tuesday, only four remained in care. Those four were out of serious danger.

By 2 p.m. Tuesday, at the time of a press conference, all Burnett County citizens were believed to be accounted for.

“Everyone that we have been asked to look for has been accounted for,” said Sheriff Tim Curtin.

Also by that news conference, utility crews had fixed some storm damage.

The village used generators after the storm for its water system. Toilets and faucets have been functioning. Water leaks are the biggest problem the village’s utilities manager Mike Bentley has encountered. With debris covering valves, the village crew has been struggling to shut off water.

Wisconsin Gas, who by Tuesday morning had shut off gas to the whole village, was ready to turn the gas back on in the northern and southern parts.

Northwestern Wisconsin Electric hoped sometime Tuesday afternoon to restore electricity to the same parts of Siren. In the south, service would be restored beginning near Capeside Cove. In the north it would begin at the Lodge at Crooked Lake, said Mark Dahlberg, president of the company.

Starting at 3 p.m. Tuesday, residents were told to treat all electric wires in Siren as live wires.

That warning was partially a precaution, as central Siren would remain without services, due to extreme damage there.

Tuesday, during a special meeting, the village board hired Kieger Enterprises, a disaster firm from Hugo, MN, to manage and work on the village’s clean-up. Project manager Pat Iwan started working in Siren Monday night, when his firm came to donate services. It loaned the village a generator and light poles. It’s unclear how much the Siren project will cost in the end.

Kieger plans to use local contractors and its own crews — some of which are working on the Houston hurricane clean-up — to repair public property in Siren.

Initially, the firm will use volunteers, which were herding into Siren Tuesday, to collect debris and haul it out of Siren. Kieger will haul out private property debris if it’s collected on curbs. Debris will go to a waste site in Bruce, WI. That site has promised Siren a discounted rate.

The debris includes trees, cars and houses which sat in the tornado’s path.

The storm’s width ranged from one-quarter to one-half of a mile wide. The National Weather Service classified the Siren tornado as an F-3 storm, said Larry Blahauvietz, Siren’s village president. That classification means the tornado’s winds could have reached 206 mph.

In Siren, the winds pulled trees from the earth, caved-in buildings and flipped over cars.

Perhaps the worst damage occurred in central Siren, where it flattened houses and businesses. That damage reached from Main Street, at the southern end, to Adventures restaurant, at the northern end. It occurred from the hockey arena, on the village’s west end, to the Siren School on the east end. The school was spared.

Many people in that spread were left without homes and apartments. Volunteers set up a shelter in the school, where an official Red Cross site was set up in the early morning hours on Tuesday.

As in other hardest hit parts of Burnett County, in central Siren, fallen trees blocked roads and entrances to houses. This forced emergency workers to chainsaw their way from house to house to check for trapped citizens.

This area is also suffering the worst electrical problems.

It may take a week to get that central part of the village energized, according to Mark Dahlberg of Northwestern.

He said the Siren tornado is probably the worst storm he’s seen since he’s been with Northwestern.

“And I’ve been here 36 years,” he said Tuesday from his Grantsburg office, where he was helping to coordinate the company’s work.

Northwestern’s poles and wires in central Siren were a mess Tuesday. In some places fallen wires had created spider web-like barriers over roads. Downed power lines are strewn over almost every street in downtown Siren.

Dahlberg said other storm-hit areas would also wait at least a week before they would get power. It will take that long before Northwestern crews will even get to Mudhen Lake. Rather than repair beaten lines in the Falun area, Northwestern will build anew. Although this work may start today or Thursday, it, too, will take at least a week.

Like Burnett County, Northwestern’s crews have taken a beating.

“They haven’t recovered from all the Balsam Lake damage we had last Monday night,” Dahlberg said. For that storm, crews were working overtime all week.

The most unreal damage Dahlberg heard of happened not in Siren, but near Falun.

“The wind was so strong that it picked up 70-foot poles with conductors on them and blew them across Range Line Road and then put them in the field on the other side of the road.”

People who want to enter Siren for any reason — for work or volunteering — must register at the Burnett County Government Center on State Road 35. Workers at the government center will give people arm bands, so they can get past police and into the village.

Several neighboring police departments and emergency rescue teams — including those from Douglas, Dunn, Washburn and Polk counties — came to Siren Monday night to help the local sheriff’s and police departments.

“We certainly anticipate that those buildings that were destroyed will rebuild,” he said.

When asked by a TV reporter why he’s so optimistic, he said, “I think the people like living in this area. They have their families here.”

Someone was trying to convey the same message at John Baker’s Truck and Tractor store Tuesday. With a backdrop of open space where there used to stand old trees, a portable sign there might have read more like a prayer than an assertion:

“Siren is still a great place to live.”