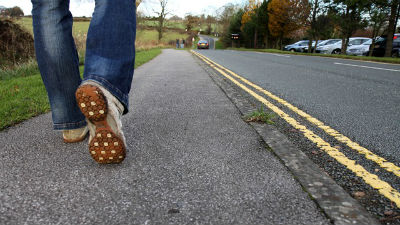 County woman’s daughter hopes to be first woman to walk around the world. The mom’s moving sale will raise money for her daughter’s cause–breast cancer research.

NEAR VOYAGER VILLAGE–Rosemary Rawson’s daughter has been moving around the world for the past 22 months. It’s fitting, then, that the moving sale Rosemary and her husband, John, are hosting this weekend will be a fund-raiser for the daughter’s cause.

Polly Letofsky has covered 5,000 miles since she began her GlobalWalk for Breast Cancer in 1999. At the end of three more years, she will have walked 18,000 miles on four continents in 20-plus countries. She will have outlasted over 50 pairs of shoes. She’s cancer-free, but along the way she hopes to earn $1 million for breast cancer research.

The Rawsons’ sale starts at 8 a.m. Saturday at 28545 Bridge Road, west of the Voyager Village clubhouse.

If Letofsky finishes her planned journey, she will become the first woman to walk around the world.

“She wanted to do the walk,” her mother said, “and that has been clear since she was small.”

Letofsky’s dream formed when she was 12, living in Minneapolis. At that time, Dave Kunst, another Minnesotan, became the first man to complete a world walk. Kunst’s walk captured Letofsky.

She started traveling at a young age. In high school, she took a trip to Sweden with a friend. Alone, she went to Denmark, and “discovered she could do it,” Rosemary Rawson said. She studied for a college semester in Mexico and backpacked in Europe and around her new home, Vail, Colorado. She lived and worked in New Zealand for four years. She traveled in Australia and Thailand, picking up odd jobs to earn her way, and she walked coast-to-coast in England.

Always in the back of her mind was Kuntz and her dream. She would think, “When I do my walk …”

“It occurred to me when I was about 36 that if I was going to do it, I’d better be getting at it,” she said. Letofsky, now 39, who has never been married and has no children, knew she wanted to walk for a woman’s cause. Breast cancer emerged.

For two years, Letofsky planned her trip. She worked to get corporate sponsors.

“It was very difficult,” she said. “Try talking to corporate financial people and say you’re walking around the world to raise money for breast cancer. Their response was usually, ‘Yeah, right.’”

She set up an organization called “WorldWalk,” which fell apart shortly after the beginning of her walk. She regrouped and created GlobalWalk. She now has 25 sponsors who supply her with items including film, T-shirts, walking shoes and an airline pass to get her across oceans. In addition, Letofsky has thousands of personal supporters.

Right now she’s walking up the coast of Australia. Each night she stays with Lions Club members, who have adopted her as their cause.

She hooked up with the Lions through the press. When Letofsky goes into a new town, she often does interviews. In Melbourne, Australia, the president of the local Lions Club, whose wife had been battling breast cancer, heard Letofsky on the radio. He tracked her down and offered her a place to sleep. Club members in towns up the coast have taken her in.

Next, Letofsky will head to Asia. In an email last Friday from Sydney, Australia, where Letofsky was speaking at a breast cancer symposium, she talked about her trip.

“In eight weeks I’ll be heading into a very chaotic year in Asia,” she wrote. “It’ll stretch my comfort zone well beyond (what) I ever thought I’d be capable of. (When I get to the other side of India, I plan on having one huge, gargantuan party.)”

After Asia, Letofsky heads to Europe, Iceland and the eastern U.S.

In the meantime, mom Rawson will be having the moving sale, moving to Arizona–where her other home is–and working on the GlobalWalk website at www.globalwalk.org. Through her daughter’s web journals, Rawson follows along with the adventure.

“I’m astonished at how she’s gotten it together,” Rawson said.