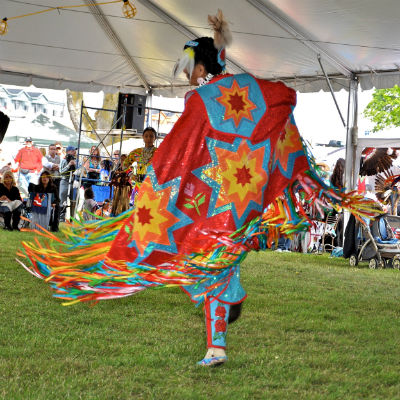 HERTEL–Momma Wolf has traveled throughout the U.S. spreading the word about Native American gangs.

She knows that gangs are becoming more mobile as members leave reservations, move to cities and then bring the gang back to the reservations.

When those gangs become forceful, drug use rises, suicide rates rise, and violence cannot be controlled.

Momma Wolf’s worry stems from statistics that this sector of gangs in strengthening.

The Lakota Native American woman whose full name is Waneta Lone Wolf created “Dream Weavers,” her traveling group that reaches out to Native American children, teaching them what gang life is really like.

Meet Oso, a third-generation Native American gang member. He took after his grandfather in the worst way, he says.

Oso told the gathered teens about the realities of ganghood.

“I always wanted to be tough, be a homeboy,” he said.

So when he was 13 years old, he started doing drugs and hanging out with older kids.

At 15, Oso rode in the back seats of cars, pulling off his socks and shooting heroin between his toes.

“I never thought the choices I made would affect my family,” he said.

But they affected his best friend’s family first.

He was hanging out at Manuel’s house for two days. He hadn’t gone home to eat, change his clothes or say hi to his mother.

So she came to him.

When his mother appeared at Manuel’s door, Oso stood rigid. Around the corner hid a stolen car he and his friends were going to drive later that night.

His mother wanted to take him out for food.

He refused. As he walked her to her car, she began crying.

“I’ve got a bad feeling,” she told him. Under the pressure, Oso relented. He went with her to eat and buy a new pair of shoes. After, she would bring him back to Manuel’s.

Oso woke up the next morning at 5 a.m. to a news report about a car accident blaring on the TV screen.

Oso recognized the car. With Manuel’s mother, he went to the police department. There police said they had Manuel’s body.

“By that time, I wanted out. I did. But it was already going so fast,” Oso said.

Oso’s gang enemies began doing drive-bys at his house. He watched his mother crawl on the floor to escape the gunfire.

“What it did to my mom, I can never take back in my life, the pain it caused her.”

Today, Oso is out of the gang and drug free. It amazes him. Turning 21 was remarkable. He never thought he’d live that long.

Looking at the sea of captive Ojibwe faces, Oso begged the kids to stay away from gangs.

“I look around, I come to places like this. It’s beautiful here. I wish my kids could grow up here,” he said. “My neighborhood? There’s nothing there but death. What you have here is life.”