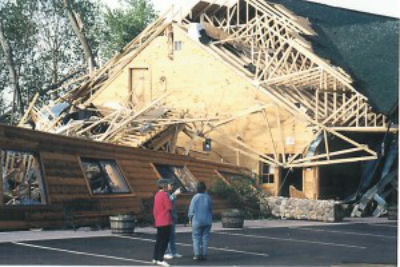 Tornadic winds beat down Siren’s new tourist industry. Homes of the locals, who lived there before the business boom, were ripped away, too.

SIREN—In the last couple of years, Siren has boomed with a new strip mall, a theatre, a Dairy Queen, realty offices, a meat market and a hockey arena.

In less than five minutes Monday night, tornadic winds of up to 206 mph caused literal booms all over town. The walls of those new tourist businesses crashed down.

“This is our brand new town. Everything was new,” Mrs. Dave Peloquin said Tuesday morning, as she walked her toddler grandsons around town, checking out the damage.

The Burnett Youth Hockey Arena was flattened. Only two stone pillars, which used to hold up the entryway, remained.

The insides of the Dairy Queen hung down, as did the power lines on the streets. The fast-food place, whose parking lot was finished just last week, was the dream come true for owners Kent and Kara Boyer.

Mrs. Peloquin said, “This is devastating. In the last year they’ve worked so hard.”

Peloquin’s home on Johnson Street, southwest of Main Street, survived the storm. Like many lots, though, all the trees blew down.

But Peloquin felt lucky as she walked through town.

Her son, just getting out of the U.S. Marines, came to town Tuesday morning to volunteer. When discharged from the Marines, he planned to move to Burnett County and get a construction job in the Twin Cities.

Now he thinks he can find a construction job right in Siren, his mom said.

“I was hoping and praying they could move up here.”

Buildings in central Siren were hardest hit. Many on State Highway 35 were ruined.

The Remax realty office is gone. Workers there jokingly stuck “For Sale” signs all along where the building formerly stood.

The Conoco store is gone. Its car wash stands next to the building, barely touched.

Russ’ Meat Market, which opened a couple of months ago, was stripped on the outside.

Next door, the storm blew out the front windows and a portion of the south wall of the Olsen and Son drug store. Workers stayed overnight to watch the store and pack up drugs, a hot item for looters.

“There were people last night trying to get in — younger kids,” worker Erica Doriott said.

“We were just talking, we don’t know where to start. Where to start? What to do next?” she said. “I assume we’ll try to board it up.”

Harlan Pygman’s two-story sewing machine repair shop on the west end of Main Street looked like a doll house Tuesday. With the east wall blown off, one could see sewing machines, books and figurines lining the walls of both stories.

“I didn’t think this building would go, it’s stood so many storms,” Pygman said as he cleaned off his goods.

“I’m 81 years old,” Pygman said, pointing to Hartman. “I didn’t plan to stay in business too long. I was just trying to break him into it.”

“He was breakin’ too hard,” Hartman joked.

Pygman said he doesn’t put too much value on material things.

People working in restaurants, bars and convenience stores report that the storm seemed to come suddenly.

The village siren was damaged in a lightning storm earlier this spring and so didn’t alert people. Some heard police going door-to-door making warnings. But others heard TV warnings, saw the sky and felt the wind.

Candi Erickson at the Holiday Stationstore was treating the coming storm jokingly.

“This is Siren. As long as I’ve been here we’ve never had anything bad.”

Her mother called her twice and told Erickson a bad storm was coming. The mother told the girl to stay at work. Still, Erickson laughed it off.

Two of her co-workers sitting outside came in with concerned looks.

“Those clouds are really getting serious,” one said.

Suddenly, they saw a tornado form and head their way.

They ran for the coolers.

Through the glass doors they saw rain.

“The rain was coming and things started shaking,” Erickson said.

A hole in the roof leaked rain into the store.

When the storm ended and Erickson emerged with her friends, she realized the storm hit much worse elsewhere around town.

“It’s just amazing,” she said. “It’s movie stuff. You see it in the movies, not in Siren, Wisconsin.”

As Erickson looked around at other stores in the black-out, she realized this wasn’t the movies. It was indeed in her small town.

“It’s gonna take a lot of a community to come back together.”