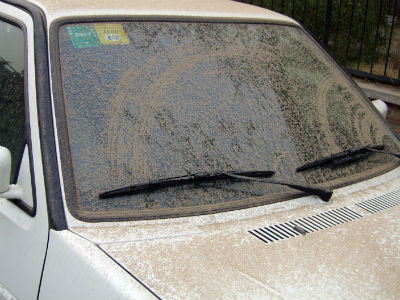 With new, cleaner equipment, Peat Technologies can produce peat products at Siren site until Aug. 1. But it must make plans to move out and deal with neighbors’ dust complaints.

In front of a county committee, which controlled the company’s short-term fate, the company admitted its guilt. (It had to. Company workers who came to fight for the company tracked in on their boots the same dirt the people were complaining about.) Still, the company asked permission to be a neighbor for a few more months.

After all, inside its own dust-covered building it had been producing new world technologies and employing 22 area people. It hopes to double or triple that number.

The company–Peat Technologies–succeeded. And, believe it or not, the county committee–the Burnett County Zoning Committee–seemed to almost create happy campers out of those angry neighbors by making Peat Tech promise to clean every nook and cranny it dirties before it moves out of town this fall.

At least that’s what all parties involved hope happens.

The Zoning Committee will allow Peat Technologies to keep operating on a conditional use permit until Aug. 1 if the company takes the following four actions in the next 30 days:

1. Works with all the surrounding property owners to create written argeements detailing how the company will clean up peat dust which has escaped its operation and drifted to neighboring areas;

2. Meets with the State Department of Natural Resources to address a potential dust-pollution problem;

3. Acquires land for a new facility which the company plans to build this spring; and

4. Returns to the Zoning Committee every 30 days until Aug. 1 with reports of the company’s construction progress.

Peat’s neighbors have been putting up with dust problems for two years, since 1999 when Peat first got a conditional use permit from the Zoning Committee. The company needed the permit–and the extension it got Tuesday–in order to operate an industrial plant in a commercial zone. Peat leases the building, just north of the Siren Then and Now Antique shop, from Charles Albrecht.

The company has plans to have a new facility built by the fall, either to a site in rural Danbury or one in rural Grantsburg. In fact, the company has always planned to move to a more refined facility once its products proved successful. It’s had that proof for some time now, but company spokespeople say past relocation plans have botched.

In this last stretch of time before it says it will move, Peat Tech needs until Aug. 1 to fulfill customer demands for its agricultural product.

At first, property owners at the meeting didn’t want Peat Tech to be able to produce this spring and summer–its busiest time of the year. They didn’t want to endure more dust.

Peat Tech produces a bacteria-packed peat granule which helps plants including soybeans and winter wheat grow. Peat is a partially decayed vegetable matter found in bogs. It’s harmless and so is the dust which comes off it.

To make the granule, though, the company must dry peat with hot air and then feed it into cyclones–“captive tornadoes,” as Plant Manager Doug Green calls them–which whip the peat around. Most of the peat gets sucked into augers which take it into the facility for processing.

But some of the peat escapes and makes its way out of the cyclones. Steam from the dryers carries the peat dust away from the plant. It then settles onto houses, cars and white snow.

In bad instances, when a stick in the peat plugs the cyclones, a good deal of dust can escape. This has happened a couple of times.

The dust makes its way into people’s homes through windows and vents.

Hunter has had other problems, too. His television and computer suck in the dust.

“My carpet. You clean it today and next week it will be dirty,” he said.

“The only thing I’m concerned with is the future value of my property,” he said.

An appraiser told Volberding recently the presence of Peat Tech, if it remained, could knock down house prices.

Glenna Hanger misses the quiet that used to surround her house, situated behind Peat Tech.

“I speak from an aesthetic angle,” she said. “I can’t hear the owls in the trees anymore. Maybe that’s not important, but that’s why we moved to the country.”

The Siren Then and Now antique shop owners, whose building is just next door to Peat Tech, complained of wrecked goods they had sitting in their storeroom. Items worth $300 are covered with peat dust. Quilts have been destroyed. A parking lot outside is squishy with peat mud.

“Nobody had the foresight and knowledge of what this processing system was about,” Jerry Braastad said. The Braastads entered into a written agreement with Peat Tech that says the new company can use some of the Braastads’ land for its equipment. That land is now so muddy that the Braastads can’t use it for their own loading and unloading of goods.

According to Green, the company has basically been engaged in research and development since it started production.

“The problem is that nobody on Earth knew how to do this when we started,” said Doug Green.

He was speaking about the real future of Peat Tech. The future is not the granules for plants, which have been produced for years. The real product is wastewater treatment granules. For these, the company has used experimentation.

The granules make wastewater cleaner than water found in most swimming lakes. Authorities require that swimming water contains no more than 100 counts of fecal coliform bacteria. The water Peat Tech ends up with has no more than 13 to 15 counts. Green expects that number to fall even more as the process is refined.

For the funds to get this wastewater technology going, Peat Tech has manufactured the plant granules. Peat Tech now makes 80 percent of the U.S.’s production of those granules. Its products are shipped to Brazil, Australia and Canada.

As a result of that production, problems, including dust eruption, have occurred.

Bruce Davis of the Northwest Regional Planning Commission has been working with Peat Tech all along to get it off the ground.

“So we’ve had hiccups in the process.”

Peat has paid for those hiccups, though.

In fact, Peat has signed an agreement with Albrecht that states his building must be returned to its original condition once Peat Tech is done operating in Siren.

Neighbors criticized Peat Tech and the Zoning Committee for allowing the operation to continue at the present facility.

Peat Tech has suffered many fires: Peat, is essentially a fuel. During the drying process, it encounters heat, and, in the cyclones, it feeds on oxygen.

“How in the world did the board allow them to go in there in the first place?” she said. “This just spells danger.”

Property owners wanted to know why Peat Tech waited so long to look for a building.

The company secured its permit renewed in 2000 and had plenty of time to move out before now, Braastad figures.

“It’s almost like you don’t care about those deadlines,” he told Green.

According to Davis, the problem with relocation has resulted from plans going sour.

Originally, Peat Tech wanted to move into the Siren Industrial Park on the south end of town. Those plans fell through when construction couldn’t take place fast enough.

The company then wanted to buy the STI site south of Grantsburg.

Peat Tech’s conditional use permit ran out March 7. On Feb. 28, just before Peat Tech was set to close on the STI site, Davis was made aware of potential environmental problems, problems he said the building owner wasn’t willing to address.

The two sites Peat Tech is considering buying have been between 20 and 40 acres, land enough to manage peat piles on the ground without bothering neighbors, Davis said. Because of new million-dollar equipment that will go into the facility, the company doesn’t expect dust problems.

All Peat Tech needed Tuesday was a chance to stay open until August, so that its customers didn’t go elsewhere for peat products.

It wasn’t until the last 10 minutes of the hour and a half meeting that the committee gave an indication it would allow Peat Tech to keep operating.

In fact, members seemed not to favor the idea.

While she supports new businesses, Susan Bohn worried that Peat Tech might keep pushing back its plans. In addition, she empathized with property owners who have already lived through one permit extension.

Green looked worried toward the end.

He’s showed up at the plant at 2 a.m to fix problems. In the last year, he’s worked over 600 hours of overtime, he said. Still, dust at the Siren site seems insurmountable.

“It isn’t through lack of effort that we have this problem.”

But the committee did grant the permit extension. Within one hour of the granting, Green appeared eager to comply with the committee’s conditions.

He arrived at the door of the Braastads’ shop to work out a cleaning plan.