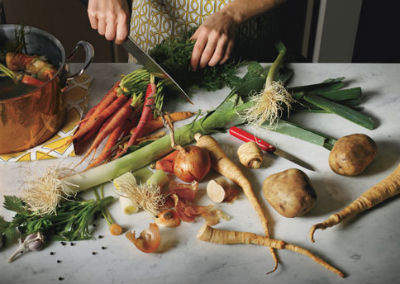 Cheesemakers Dave and Mary Falk have been inducted in the international Slow Food Movement. With the movement’s help, the Falks hope to fight big cheese’s aim of making them extinct.

“Being fast makes a man inconsiderate and foolish,” he concluded.

Today, many Italians share the same point of view. Watching as McDonald’s set up shop in his home country, luring people inside for cheap and fast fare and out of ristorantes where locally-grown vegetables stewed, Carlo Petrini founded Slow Food.

Global standardization is ridding the world of regional foods, Petrini charged. As people opt for chain restaurant food, time-honored traditions of preparing food begin to disappear. And, soon, gathering at tables goes, too.

Two years ago, Slow Food opened a New York City office, and with it came the “Ark of Taste.” This sub-movement, inspired by Noah’s Ark and its protection of animal species during the flood, seeks to preserve dwindling, regional foods. It recognizes that, as McDonald’s fills its registers, local farmers’ pockets go empty. The corporate monolith doesn’t serve Wisconsin wild rice, after all.

Every year, food aficionados nominate regional foods for induction into the Ark. This year, a Madison restaurant owner nominated a sheep’s milk cheese made by Grantsburg-area artisans Dave and Mary Falk as one to protect. Their “Trade Lake Cedar,” sold under their company name “Lovetree Farmstead,” has been accepted by Slow Food.

The induction means more international recognition for a cheese that in the past two years has won four American Cheese Society awards.

But it’s more significant than recognition. It could mean basic survival.

If the NCI succeeds in persuading the U.S. Food and Drug Administration, the Falks and thousands of small cheesemakers nationwide will be forced out of business.

“They consider us an endangered species,” Mary Falk said.

Europeans traveling abroad to the U.S. have told Mary Falk what they think of American cheese.

They’re used to the stuff that comes in small batches, from goats and cows that graze on regional grasses and drink local water.

“The cheese in the U.S. doesn’t have any flavor,” she says they tell her.

Part of the problem is that many U.S. settlers didn’t have a chance to establish regional foods before industrialization smacked them in the face, according to Falk.

Take Wisconsin, for instance.Becoming a state in 1848 meant that its citizens were practically born into industrialized food. Other countries developed their fare long before the age of mass production, but the same isn’t true here.

“We are just now in the U.S. creating regional foods,” Falk said.

She and her husband, Dave Falk, have spent 10 years, and plan to spend at least 10 more, cross-breeding a hardy milking sheep to survive northern Wisconsin’s climate. The sheeps’ milk will go directly into production of small batches of the Falks’ cheese.

They rely on the flavors of the area’s natural plants–lilacs, cedar and mustard. All the flavors drift with the “toolie fog” into the couple’s hand-built cave and onto their aging cheese.

(The fog is the result of cool spring air meeting the warming earth.)

“What I make all year they make in half a day,” Mary Falk said.

These big producers have watched the artisan cheese market grow 5,000 times in the last couple of years. More gourmet cheeses are coming in from outside the U.S., and more U.S. farmers are entering the market.

Stores see the potential for selling the cheeses. At Whole Foods in Minneapolis, for instance, Mary Falk guesses there are something like 460 artisan cheeses available, all tasting a world apart from Kraft’s cheddar.

“You can start to see why big industry is upset,” she said.

Mass-produced cheese contains a high water content, and, in order to ship out amounts demanded by consumers, is cooked at high temperatures for pasteurization. Mary Falk says these high temperatures take the flavor out of the cheese, cooking out the sweet grass flavor or the mustard spiciness. It ends up generic-tasting, the flavor to which Americans are accustomed.

But big industry is getting worried. As more Americans taste “real” cheese, some switch over. Industrial cheesemakers can’t compete in the small batch market. Mary Falk studies the milk while preparing each batch of cheese. Because milk varies, she, too, must be flexible, adding ingredients here, taking away there, monitoring humidity in the cave. Big cheese can’t afford such nurturing and still enjoy the high profit margin they make by selling in superstores.

Their solution? Eliminate the competition.

She read the study, and what she discovered sent home the message that big cheese was battling for a full ban of raw milk cheese.

The cheese used in the study, funded by the federal government and undertaken at a South Dakota university, wasn’t even raw milk cheese, Falk asserts.

Researchers first pasteurized the milk and then injected it with an “E. Coli cocktail,” Mary Falk said. Over 1,000 times the level of E. Coli found in near-healthy milk composed the cocktail.

“That is not aged cheese,” she said.

She called the process “bizarre.” Any artisan cheesemaker would have thrown out the milk, she charged, because it would have smelled awful.

Raw milk cheese is different from pasteurized cheese in that, during the aging process, bad bacteria dies off. The E. Coli level in the study sample made the process impossible, Falk said.

“We’re next to bottled water when it comes to contamination,” Mary Falk said. “Why are they going after us? It’s not contamination.”

Most artisan cheesemakers, like most artists, don’t have a lot of money. Dave and Mary Falk can’t afford to fight big cheese on their own.

That’s why induction into Slow Food’s “Ark of Taste” is beneficial, they say. Already, the American Cheese Society has hired a full-time lawyer to fight against a ban.

The Slow Food Movement, in addition to asking chefs to pledge the Ark products in cooking and to help with publicity, has promised to help with litigation.

They join Whole Foods, the chain store that sells natural and organic foods nationwide, and Old Ways in the fight.

Meanwhile, in Burnett County, Dave and Mary Falk keep themselves informed about the lawsuit.

Waters sent the Falks a card telling them Trade Lake Cedar is her favorite cheese.

These chefs would be impacted by a raw milk cheese ban. The ban would include imported raw cheese, as well.

At a deeper level, producers like Falk mourn the potential loss of a chance to build regional food scenes.

Slow Food officials have written in movement literature about longing to live like snails. “If only we could look around like snails, warily coming out of our shells, saving energy and drawing more from our contact with earth and its fruits.

“Surely this would be a new way of life.”