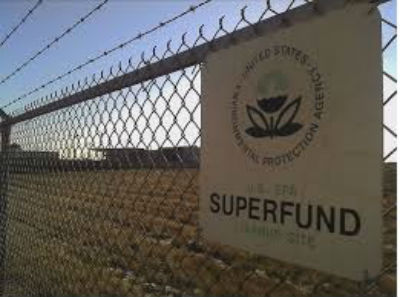 The U.S. EPA will spend the next 12 to 15 years cleaning pentachlorophenol from the site.

SIREN–Back before the U.S. government knew what damage PCP (pentachlorophenol) could do, it allowed wood pole companies such as Penta Wood near Siren to set its coated poles on the bare ground.

The damage of 40 years of such a practice was evident to U.S. Environmental Protection Agency workers who in 1994 found areas of open ground with oil soaking on top.

PCP was mixed with oil before being applied as a sealant to poles.

The EPA is nearly finished with its pollution clean-up project on Penta Hill. It expects to be completely finished in three weeks.

The $7.5 million project was paid for by the EPA’s Superfund because Penta Wood went bankrupt in 1992. It could not afford to clean up pollution, according to a representative of CH2M Hill, the general contracting company handling remediation.

The Wisconsin DNR had been after Penta Wood for pollution since the 1970s, when the company failed to come into compliance with pollution laws.

By the time the EPA is finished on Penta Hill, it will have contained all the property’s oil-contaminated land onto a seven-acre parcel. Arsenic on the site, once used in a mixture to seal poles, has been contained in cement block underground. Six inches of sand followed by six inches of clean topsoil covers the polluted ground.

The seven-acre parcel will be surrounded by fence. Inside the fence, underground, eight wells will pump groundwater polluted with oil and PCP in a water treatment facility on-site.

When water comes into the facility, the first procedure is to separate it from oil. The oil is collected into a tank and is eventually hauled to Texas to a hazardous waste incinerator.

The water moves on. It moves into activated clay tanks and then into an infiltration system. The water then flows back outside, into a clean ground area northwest of the facility.

On Penta ground, the “bad,” polluted ground is isolated to the east section of the property. There, contamination goes 100 feet deep. The clean ground remains on the east side. The top, contaminated layers were peeled off and piled onto the eastern seven acres.

Fresh air will be pumped down into the seven acres to expedite the natural cleaning processes.

According to EPA Remedial Project Manager Tony Rutter, no private wells around Penta were contaminated.

“We’ll be testing them twice a year for the long term,” Rutter said.

Rutter estimated it could take up to 15 years for the groundwater on Penta Hill to come up clean.

“You really can’t estimate how long it’s going to take,” he said. Many environmental variables contribute to the time frame.

By the end of the fall, the Penta ground will be seeded with natural grasses. Next spring, the EPA will pay for tree planting. Throughout the winter, a water plant operator will supervise the water clean up. She will carry a pager that will sound if any of the automated machinery in the plant malfunctions.

Penta began treating wood in 1953. First the company used dipping tanks to seal poles. Poles were covered in PCP and oil and were stored freely around the site.

The company then used a pressure chamber to coat poles. They were loaded onto rail cars, which were driven into the chamber.

Eventually, the company switched to coating the poles with a mixture of arsenic, zinc and copper, according to Rutter.

The EPA usually requires companies pay for their own pollution clean up. Since Penta Wood went bankrupt, the government had to pick up the tab. Bankruptcy also prevented the government from collecting fines from Penta, which apparently operated long after it knew pollution problems existed. Penta Wood was run by a local board of directors.

The land is still owned by Penta President Walter Johnson. Rutter said a tax lien exists on the property, though.