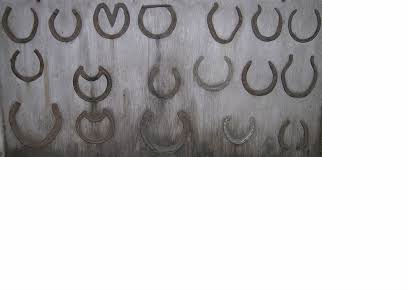 FREDERIC–Ten years ago, Dennis O’Donnell had a few things lying around his yard.

He had a drinking cup from the barn where he’s been milking cows for years and years. He had spikes off a drag, and there were those soybean extruder parts he’d been meaning to get rid of.

So he fired up the welder he uses for minor repairs on his farm equipment and made something happen.

The huge bug that now sits near his driveway was the product of that afternoon’s labor and the start of Dennis O’Donnell, Junque Artiste.

Since then, O’Donnell has expanded his line of junque to include cowboys made of welded horseshoes, lamps, birds, turtles, geese, tables and chairs, roses and his first rusty cow, complete with a tagged ear and a registry sheet. He entered her in the Polk County Fair and won a purple ribbon.

“That’s the first blue ribbon I got on a cow in my life,” he said.

Each item is made from “recycled” goods–broken down farm machinery, drinking cups from dairy barns, washers, bolts, pipes, and just about anything else O’Donnell can find. For he did, eventually, run out of his own junk.

“I’m running an ad in the paper for water cups,” O’Donnell said, drinking a glass of iced tea in the kitchen on an 85-degree day. His wife, Linda, who gets a kick out of his art–“He continues to amaze me,” she said–was outdoors weeding her flower garden.

Since that first light bulb of genius a decade ago, O’Donnell has kept his eccentric sculptures coming. At first, they were for him or whoever drove up into the yard and saw the iron butterfly he made for his wife, which she stuck to the railing of the patio.

“That’s why I do it,” O’Donnell said. “I like making people laugh.”

But a few years into it, the owner of the Luck gift shop StudioWorks showed up at his house for his birthday party. She told O’Donnell she wanted to put a few of his things in her store.

Today she has more than a few things at her two StudioWorks shops (The other is located in Eau Claire). O’Donnell also sells sculptures at another gift shop in Barronett.

His work has really taken off, and he keeps producing old favorites and his favorites, “Something new,” he said. He doesn’t keep track of the number of sculptures he completes, though.

“Two years ago I know I made at least 75 birds,” he said. And in the last two years he’s sure that number has significantly grown.

For a year and a half O’Donnell participated in the Cedarburg Cultural Center’s traveling museum for Wisconsin’s 150-year celebration. The museum went to Green Bay, Madison and the Chippewa Valley Cultural Center.

A gentleman came to load up O’Donnell’s sculptures and began to carefully wrap each piece that would intermingle with other artists’ works in a van. The courier’s intention was to protect O’Donnell’s works.

“Pack the other stuff up so the iron doesn’t fall on it,” he said, not worried about O’Donnell’s work but, rather, the fine art around it.

The traveling exhibit was invited to Washington D.C.’s Smithsonian Institute for a two-week exhibit last summer.

O’Donnell and his wife made the trek and set up shop along the capitol mall, quite an honor for the artist.

The idea for the capitol exhibit was to contrast a normal museum atmosphere, to encourage touch and noise and excitement.

“Pieces in the museum, all you can do is see ‘em,” O’Donnell said.

His work was met with enthusiasm in D.C.

“There was this gentleman, I saw him coming up the mall,” he said. “He was grinning ear-to-ear.”

O’Donnell’s horseshoe cowboys were a big seller there. He could hardly keep up with the demand, and learning the world of customer demand has been a new one for O’Donnell.

“Anything that’s useful doesn’t sell well,” he said, leading the way around his living room where the walls are peppered with evidence of his recent African hunting trip. He has a zebra hide with the head still attached, the heads of a cape buffalo and an impala, and the stuffed body of a baboon.

On his floor sat the fireplace tool holder he crafted from horseshoes. In the kitchen he demonstrated the recipe book holder with an ornate butterfly design. And the coat rack in the Luck store?

“It doesn’t sell. Works too good.”

But the items meant to just sit around the yard are selling like hotcakes, and that’s okay with him, too.

“An old mold board from a plow,” O’Donnell said. “The head and neck are from an old cow stanchion.”

And the rocking chair (All right, it’s useful)?

And of course there’s the prize-winning cow that joins the turtle that joins the segmented alligator that lies in O’Donnell’s frog pond outside his front door. All Smithsonian-quality art by Dennis O’Donnell, Junque Artiste.